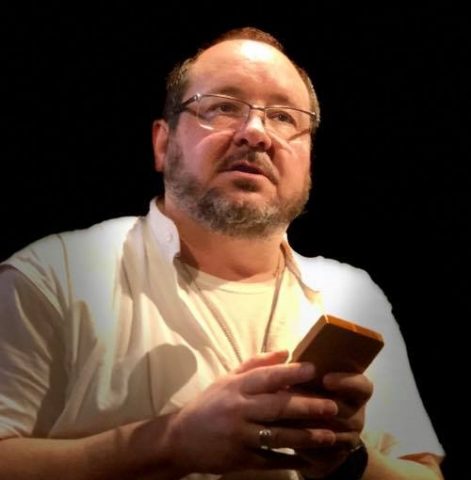 Richard Loranger is a multi-genre writer, performer, musician, and visual artist who has been working around the United States for over forty years.  He has lived in many parts of the country, including New York, Austin, Boulder, Ann Arbor, Chicago, and San Francisco, and he currently lives and works in Oakland, CA.

He is the author of Sudden Windows (Zeitgeist Press, 2016), Poems for Teeth (We Press, 2005), The Orange Book (International Review Press, 1990), and ten chapbooks, including 6 Questions, Hello Poems, and The Day Was Warm and Blue.  His work has been included in over one hundred magazines and journals, and thirty anthologies, among which are Suitcase of Chrysanthemums and The Careless Embrace of the Boneshaker (great weather for MEDIA); Naked Bulb Anthologies 2016-18 (Naked Bulb Press); the online anthology HIV Here & Now; Overthrowing Capitalism Volume 2 (The Revolutionary Poets Brigade); Beyond the Rift: Poets of the Palisades (Poets Press); and Beyond Definition and Revival: Spoken Word from Lollapalooza (both Manic-D Press).  Recent work can be found in Poetry Flash, Nomadic Journal: Wonder (Nomadic Press), and riverbabble 33 & 35.

He has organized seven reading and mixed-genre series over the last few decades, in various cities, allowing hundred of writers and performers to present their work. Currently in Oakland he curates the reading series Babar in Exile with Paul Corman-Roberts, #we, a talk, reading, and performance series of queer perspectives. He is the founder of Poetea, a monthly literary conversation group.

He has also done over 500 featured readings himself, in venues ranging from the Davis (CA) Jazz & Beat Festival to Beyond Baroque in Venice, CA, Intersection for the Arts, City Lights, Paradise Lounge, and Café Babar in San Francisco to The Poetry Project at St. Mark’s Church, The Bowery Poetry Club, and Teachers and Writers in New York, to name a few, and has shared a bill  with such poets and performers as Jim Carroll, Anne Waldman, Francisco X. Alarcon, and The Last Poets, and the bands Fugazi, Big Black, Sister Double Happiness, The Dead Milkmen, and X.  He has also been a member of several music and performance groups, including Conspiracy of Beards and The High Risk Group in San Francisco and Performance Art Church in Austin and New York.

As well he works beyond the page and stage in a few forms of visual art, some text-based and others not.  Since 2001, he has had fourteen shows of his large, multi-colored poems called blinklists, in New York as well as Chicago, San Francisco, Oakland, CA, and Worcester, MA.  He produced about half of the pieces of calligraphic art for Poems for Teeth (along with artist Eric Waldemar), and has done the illustrations and design for most of his books.  He also occasionally gives in to the urge to write poetry on objects, with a special fondness for mobius strips.

Despite all this, he has had to keep many different jobs in order to keep himself alive, from waiting tables to painting ski lifts to teaching college.  Currently he stays at home and makes up names for things.  Maybe he will make up a name for you.

He wants only a calm moment.